There are typically three things that will kill a role playing game, four if you count what John Lennon said in his song “Beautiful Boy”:

“Life is what happens while you’re busy making other plans.”

Holidays will put the Bah in your Humbug, especially if you are in a regular or semi-regular RPG campaign. Forget completing the Expedition to the Barrier Peaks when you have to Brave the Mall at Christmas.

The New Shiny. Some new RPG, card game or board game is released and you Have To Play it. This is especially true after true if you have recently returned from a convention such as Gen Con and all of those early releases or con exclusives.
I have to confess I have killed a game or two by bringing a New Shiny to the table though it was Good Business for the shop we were playing at as everyone bought the Core Rulebook from the shop.

The Old Shiny. This might be the most subversive of all as it whispers the promises of old glory and remembered adventures. The grognard in us all remembers games of D&D, AD&D or AD&D 2E played in bedrooms, basements and attics. You know that opening scene in Season One of Stranger Things.

The thing is that the Old Shiny more often than not does not pay off. I have coined a term for this: Nostalgia Burn.

A few years ago I was fangirling over the old He-Man commercials when I found them on Netflix. Boys will watch anything as cartoons is cartoons. It didn’t last five minutes as it wasn’t what I remembered.

Nostalgia Burn; [näˈstaljə bərn] noun, verb, space-time continuum paradox. When remembering something fondly only to be “burned” by the fact that it hasn’t held up over time.

A side effect of Nostalgia Burn is when a thing is “reimagined” and it doesn’t go over well and Impotent Nerd Rage occurs and claims of “You raped my childhood!” get flung about like monkeys at the zoo flinging poo. See Battlestar Galactica v. Battlestar Galactica or any of the Star Wars Prequels or new sequels.

Having had some friends who have had real abuse in their lives I really hate that phrase; Nostalgia Burn is More Better.

When you were a kid you were Burgess Meredith in the Twilight Zone episode “Time Enough at Last,” and now that you are adult(ish) you have all the means to create a gaming table of your dreams and barely have time for a full contact round of Tic-Tac-Toe.

Would you rather have this:

There are some games that don’t want or need any kind of “table presence,” meaning we can sit around the table or even in a living room with a coffee table and play. Some great games that do well without table presence: Cubicle 7’s Doctor Who, Chaosium’s perennial Call of Cthulu, Toon by Steve Jackson Games and indie games like Fiasco by Bully Pulpit.

This has a lot to do with my incessant Looking For Group stage that I am in right now. I feel like Peter O’Toole in Lawrence of Arabia but without the stint in a Turkish prison.

There is another component that can kill a game: Players.

Not just any player but certain players and not the basic Rules Lawyers; The Non-Committed, the Drama Queens, the Unoriginal, the Sticks in the Mud.

The Non-Committed are players who say they want to play and don’t show up for one
reason or another. Those reasons can be spurious BS or legitimate but the thing is their reasons will always be legitimate. It is always something. Sometimes it is life and sometimes its poor life skills.

The Solution for these people is to try and be patient as if it is the “slings and arrows that flesh is heir to” it will sort itself out or the player will usually drop from the group on their own. Sometimes you have to tell this person to go do what they have to do and when they are ready they have a spot at the table. It’s fair to everyone involved as this player isn’t dependable and apparently they have bigger things to worry about. When I was going through that stuff a regular game was my escape so I don’t quite get it.

The Unoriginal are players that want to…

“I want to play a Drow from the Underdark who has these two swords and is an outcast and is a ranger/thief/mage/assassin but has a heart of gold. Oh! And a little animal statue that comes alive and fights for him but it’s a bear!

“You want to play Drizzt?”

“No, this is an original character!”

“Uh huh. So you want to play Drizzt.”

These players do not have an original character idea, now there are a lot of tropes, especially in Dungeons and Dragons type fantasy games but it can be done. This kind of masturbatory character creation is usually done with characters like Wolverine, Batman, Deadpool, Aragorn, Legolas, Gimli and the 1981 Harlem Globetrotters.

The Solution to these players is to basically let it happen. I don’t want to harsh anyone’s fun but the real problem is that they want to play Batman circa The Killing Joke not Year One. That really is unfair to other players whether you play a level up and class kind of game or not. You have to rein these players in a bit but throw them an action bone now and again and let them kick some ass.

The Sticks in the Mud players want to play one thing and one thing only, which is
usually D&D. Or if they don’t like the idea of a game they dismiss it out
of hand. Like they are a Trek person and everyone wants to play Star Wars so they say, “Absolutely not!” These players also don’t want to try much of anything else new or if they see anything that they don’t like about a game it is a failure to launch. These players usually won’t even try anything new.

The Solution for these players might be the hardest as they can drag people around them down or get mired in The Same Old Thing. There has to be some give and take, the player has to try something new or if they don’t want to play they need to offer to run something. If you don’t want to do a thing then what is your idea Kyle? You really have to work on these people or the group has to unify and tell them what is what. 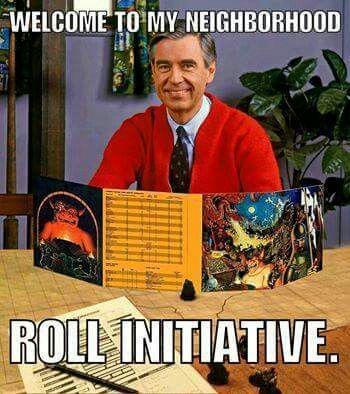 The Drama Queens are the players whose personal lives will infect the game. Be it
dickhead boyfriends or psycho girlfriends they let it creep in. Often these players are also Phone Junkies and are unable to unplug for 4 minutes much less the 4ish hours of an RPG game.

There is no real Solution for these players, if gotten out of hand it will kill a game. This is particularly so if they start bringing the insignificant other to the game and it weirds everyone out which happened to one of my groups. It got so weird that the other person started blaming themselves for the weirdness which is true but through no fault of their own.
We decided that we needed a GoodFellas style sit down with the player to hash it out. Our player would have none of it and eventually it all came out to the other person. We haven’t rolled dice with that player since.

The moral of the story, if there is one, is that game time is precious and should be treated as such. Also life is too short to not have Good Games and Good Friends.