Comics historians and armchair scholars have long pointed to the Kirby created Challengers of the Unknown as being a precursor to the Fantastic Four and definitive proof that Jack Kirby had a larger hand in the creation of the FF characters and concept than Stan Lee admits. During the late 90s Amalgam event that both DC and Marvel participated in the two teams were even… amalgamated into one concept:

In 2017 DC Comics published a definitive “Kirby cut” of the Challengers, reprinting all of his seminal work on the concept. The trade paperback included the stories from SHOWCASE #s 6, 7, 11, 12 and the first 8 issues of their self titled series. Minus D.C. Comics Presents #84 which had Kirby teaming the team up with Superman, minus the redrawing of Superman’s face!
I have now read all of these Kirby Challengers stories and they are a fun read of the late 1950s, the dawn of the Silver Age of Comic Books. Part Indiana Jones, part Super Science adventure, part 50s Space Race these stories move at a breakneck speed.

Ace Morgan (War Hero and Fearless Jet Pilot), Leslie “Rocky” Davis (Olympic Wrestling Champion), Walter “Prof” Haley (Master Skin Diver), and Red Ryan (Circus Daredevil) make up the team of adventurers. June Robbins may be an “honorary” member her treatment was a very progressive female depiction for the era. June was often the impetus for an adventure and often just as competent and capable as the guys.

The plots are outrageous and epic in scope such as the story titles suggest:
“The Secret of the Sorcerer’s Box,” “The Day the Earth Blew Up,” “The Man Who Tampered with Infinity,” “The Wizard of Time,” and a personal favorite: “Captives of the Space Circus.” Some of these stories were issue length adventures and often there were two stories per issue. Challengers stories were crammed with plot, adventure, super science and sometimes sorcery.
The one thing that the Challengers of this period do not have over their later Fantastic ancestors are, there is no easy way to say this, personalities.
Our four guys are more or less interchangeable in the character department, not one is the jokester or the hot-head or the ladies man or anything. It was 1958-59, after the comic book witch hunt and not a one of these guys would be seen as having a beer or chasing a skirt or doing anything that was remotely human like getting in an argument with a fellow comrade. Or use the word comrade. 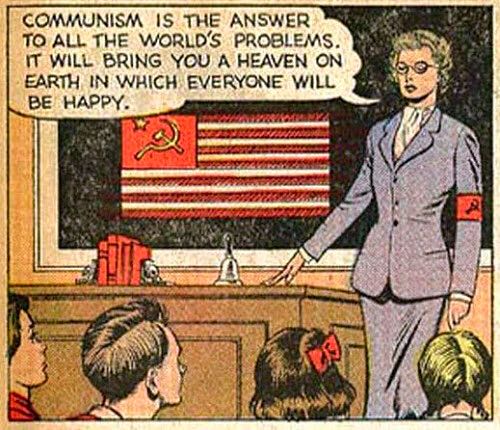 I don’t know where this is from but I love this.

The one thing that the FF were (and are) known for are being a family that bickers, pokes, cares, and loves one another. That comes from their personalities and the factor there that was missing from the Challenger stories is one person: Stan Lee.
Jack was a master draftsman, artist, idea guy, and plotter but I think it goes without saying that dialogue was not one of his strong points. Dialogue can make or break Character, making a fictional creation seem tangible and believable.
Just listen to Stan in any interview and the man can gab, not a silver tongued devil but  a madcap ringleader. It was the dialogue and characterization that Stan brought to the page. Make no mistake, he can plot and write and on creations like X-Men and Spider-Man. Stan’s introspective take on the love life of Peter Parker, for example, is the stuff of soap opera. Mythological plots that involve a space faring giant and his silver sheened harbinger of doom are all Jack.
Barry Windsor-Smith is right, Stan and Jack are the Lennon and McCartney of the Silver Age of Comics.