Recently I gave some love to the WEG Star Wars roleplaying game, one of my all time favorite systems to play. I would be remiss if I did not give some love to another well loved RPG setting and system:

This is not a “what is better” type of essay, I don’t see either as such. Each is better at different things as they are, for want of a better term, different animals.

When my daughters were little they used to play the LEGO Star Wars games with me on our PlayStation 2. This mostly entailed having R2-D2 jump off of the edge and screaming. My oldest asked me one day what were the differences between Star Trek and Star Wars? When I thought about it I realized that to the uninitiated Star Trek and Star Wars are both set in space with aliens and ray guns and spaceships; the biggest difference is that Star Trek did not have Jedi.

Trek seems to works better in a long form format such as television, and going back to The Original Series and Gene Rodenberry’s vision of telling deep stories or morality tales disguised as science fiction. Examples of that being The Corbomite Maneuver, A Private Little War and Let That Be Your Last Battlefield. Even the stories that aren’t message heavy have a message there, such as Arena and Balance of Terror. That isn’t to say that the movies don’t have some gravitas; Wrath of Khan, Search for Spock and The Voyage Home make an epic story about friendship, family, hope… The movie Insurrection (with The Next Generation cast) didn’t do big box office but is great Trek.

Star Wars has since come about with long form stories in The Clone Wars and Rebels animated series but what makes it different is that it is Mythology. Star Wars is space fantasy and doesn’t even bother with technobabble for the most part. A lightsaber works because it does, the Millenium Falcon makes the Kessel Run in less than 12 parsecs because that is what it does; when Star Wars does try to tech an explanation you end up with midichlorians which haven’t been heard from since The Phantom Menace.

FASA Trek is a percentile and d10 based game built around Action Points, if you have the AP to do an action you can try an action, once your AP is done your turn is over. Character creation assumes that most player characters are in Starfleet and is structured around the character’s life before the Academy to their cadet cruise and previous assignments before the game starts. At first glance the process can make a player feel like a Pakled but it isn’t that complicated, the layout of the books are very 1980s and that forces a player to read the text and not just browse tables. Once you have done it once or twice it can take maybe ten minutes, unless you are trying for a different theme in your campaign. 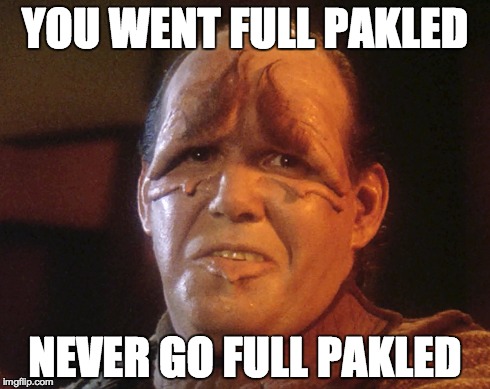 Starship combat is almost a game of resource allocation but nothing so boring sounding. The player captains a ship and the game offers a variety of Starfleet, Klingon or Romulan class ships to choose from. The captain allocates power from the engines to weapons, maneuvering, shields and of course tries to outmaneuver the opposing ships or meet scenario requirements. Imagine Tom Clancy writing a Star Trek story and that is what it feels like.

Another way the starship combat plays out is that multiple players fill certain positions on the ship; navigation, helm, engineering, science and captain and through a series of quick interactions they fight it out with another crew of players. I have played very fun games of this at Gen Con and Fear the Con and to do it right you need a lot of players.

The game made it to TNG and FASA was developing a Starfleet Marines supplement but Paramount thought that was too off-trek to be Trek,  the licensing plug was pulled.

The game itself has lived on and still continues to be many gamers’ prefered Trek RPG. Last Unicorn published some gorgeous core rulebooks for The Original Series, The Next Generation and Deep Space Nine and were in the rumored to be in the midst of creating a Voyager book when they lost the license. Some of the Last Unicorn books have a healthy aftermarket on eBay.

Task Force Games has their “unlicensed” Star Trek games and there is even a GURPS Prime Directive book.

British game publisher Modiphius has the current license and just released their take on Trek. I was in on some of the Beta testing for the game and I didn’t like it. The game uses the 2d20 system that Modiphius developed for Mutant Chronicles and Conan. It seems heavily combat focused and the rules set reflects that, they more or less ported the Conan rules to Trek and made no adjustments for the setting. It doesn’t work and I told someone at their Gen Con 2017 booth that very thing. His response was, “That’s what we did.”

Modiphius could learn a lot from Cubicle 7’s excellent Doctor Who game on how to create a rules set that reflects the feeling of an established setting.

The FASA RPG is sometimes outside the accepted Trek milieu but it is the best Trek based RPG ever produced. For all the seeming crunch there isn’t that much of it in the game except for maybe the Starships Simulator game which is near perfect and has a beginning, intermediate and advanced versions of the rules for play.

Trek doesn’t always get a lot of RPG love but gets lots of it for the starship combat stuff. IF someone is looking for Trek RPG maybe give Modphius a shot but if you want something that feels like Trek go old school and FASA.